Over the past days, I visited Groningen for the first time – to attend the International Cargo Bike Festival and Sustainable Urban Mobility Plans Conference and to learn more about this very liveable and bikeable Dutch city.

Getting there by train

But, let’s start with the journey itself that I did by train, with a 15-hour train ride via Frankfurt and Utrecht. Traveling in a slow, convenient and climate-friendly way, having a stopover at the impressive Frankfurt Central Station and arriving at the beautiful Groningen Central Station more than compensated for the delay that I had because of a cancelled train. Moreover, it was great to get a first glimpse of this cycling city when I saw the bike parking garage at Groningen Central Station and all the conversational cycling in the city center on a 20-minute night walk to my hotel.

When I had time to walk around Groningen on the first day to explore the city, I immediately saw what it looks like when the bike is the primary mode of transport! (read more about how Groningen became and remains a cycling city here)

However, it only makes sense to explore a cycling city on two wheels and so I rented a bike to experience Groningen’s cycling infrastructure and cycling culture. Once again, it became clear that traffic calming, priority for active modes and separated infrastructure are key to creating a better cycling experience. And it was amazing how getting on a bike, going to all places in the city in a safe, convenient and fast way and becoming part of this wonderful flow of cyclists for a few days gave me a feeling of co-owning this city!

It was great to see how Groningen embraces multimodality as well as transit and cycling oriented development. This becomes clear when cycling by Groningen Central Station and seeing the bike parking facilities and bike service shop next to the station. And it was good to learn that there will be further investment in bike infrastructure at the station over the next few years.

I also cycled to Groningen’s Europapark neighbourhood which a good example of transit-oriented development, comprising a new football stadium, housing, education, government buildings and businesses around a new railway station. I was particularly impressed by the bike parking facilities at Groningen Europapark commuter train station which fosters active and multimodal travels.

Speaking of what makes a city liveable apart from great walking and cycling infrastructure, I envy Dutch cities like Groningen for their canals. Such views and the opportunity to sit near the water create happiness and great places. Moreover, green spaces such as Groningen’s Noorderplantsoen park are essential for high quality of life in a city, in particular if they are filled with people and bikes on a sunny evening.

Groningen also has a good mix of old and new buildings – combining traditional and modern architecture – and great mix of diverse public spaces for a city of its size.

Finally, those buildings – turning their windows to the street as Jane Jacobs would have loved it – and the plants in front of them add so much character to the streets in Groningen. This feels like extending the living rooms and gardens into the streets and makes it a pleasure to walk!

Andreas Lindinger is a Smart Urban Management Consultant at Denkstatt‘s Vienna office and an Urbanist passionate about livable cities, next-generation transportation, and sustainable businesses. Andreas is also the founder and head of Vienncouver and Jane’s Walk Vienna. Follow him on Twitter and LinkedIn. 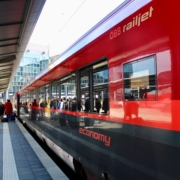