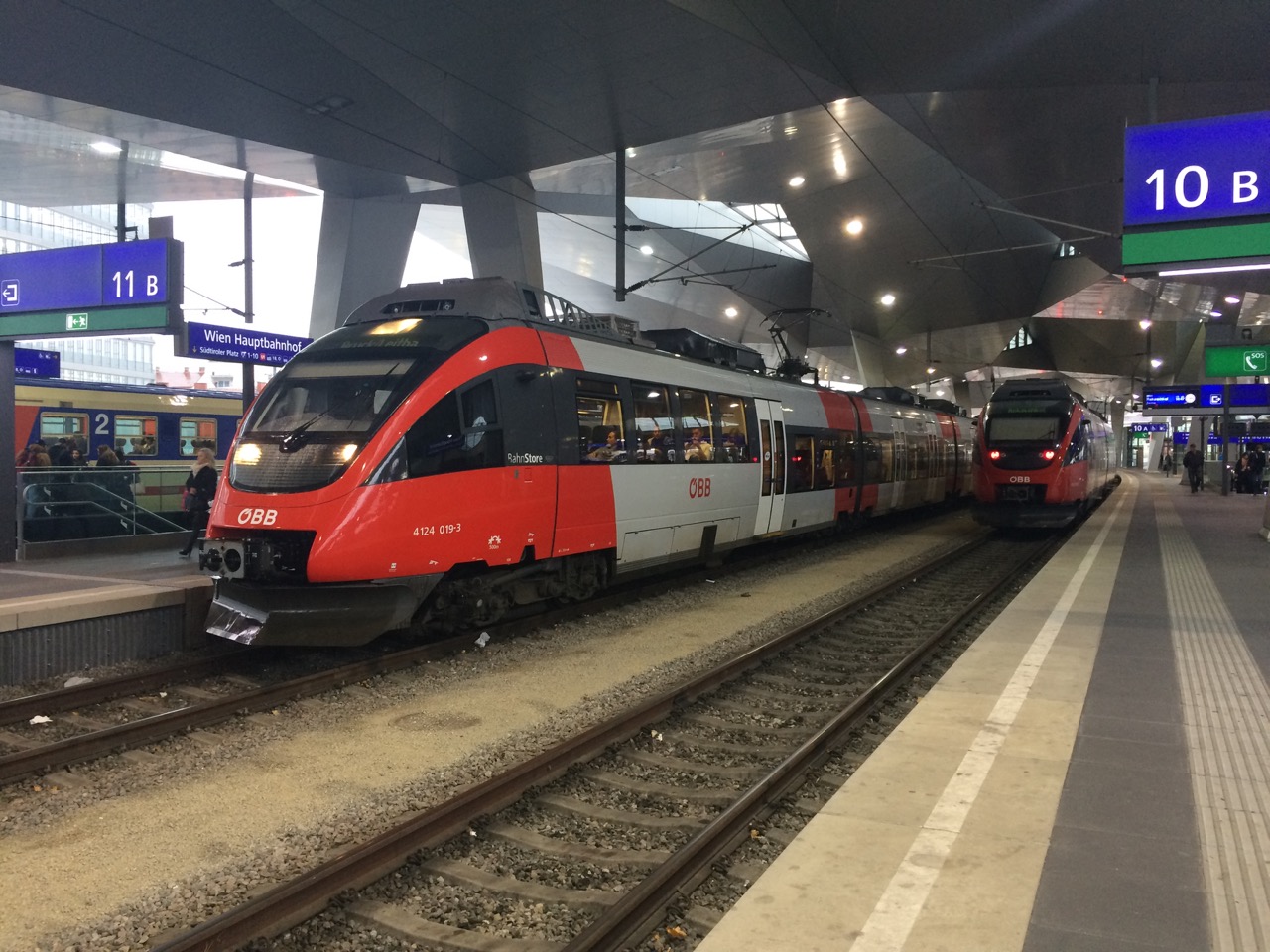 Given the complex interdependencies between major cities and their surrounding areas, more and more municipalities in large metropolitan regions are developing integrated transportation and land use plans on a regional level (such as SANDAG’s “San Diego Forward – The Regional Plan”) and establishing governance structures/bodies for the implementation of a commonly developed vision for their region’s future development.

Vienna and its Metropolitan Region 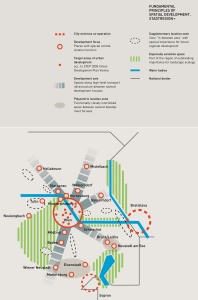 The Vienna Metropolitan Region (or “Stadtregion+” as it is called in German) is a growing region covering the City of Vienna and 17 districts in the provinces of Lower Austria and Burgenland. Based on current forecasts, Vienna is expected to grow from 1.8m inhabitants in 2014 to 2m inhabitants in 2030. The entire region is expected to grow by 400,000 inhabitants, reaching more than 3m people in 2030 and creating significant challenges in land use and traffic planning.

To meet such regional challenges, the City and the surrounding areas collaborate very closely, with common planning goals, joint research, and coordination of land use and transport planning having been institutionalised for more than three decades: The planning organisation PGO (Planungs-gemeinschaft Ost) serves as a strategic body for joint spatial planning and the joint transport authority VOR (Verkehrsverbund Ostregion) plans, coordinates and organises public transportation. Moreover, the metropolitan area management Vienna-Lower Austria SUM (Stadt Umland Management) was established in 2006 to serve as a forum for informal cooperation along the administrative border between the two provinces.

However, like many regions the Metropolitan Vienna region has to cope with weak institutionalisation and a lack of formal planning instruments as the prevalent type of informal cooperation aims at building trust and a common understanding but has no planning authority, nor a legal status. Moreover, it has to deal with three different provincial regulations (e.g. spatial planning laws) and operates within a complex 3-tier political, administrative and financial framework due to Austria’s federal structure in which the provinces have legislative and executive powers in spatial planning, the federal level determines taxation and fiscal repartition of funds, and municipalities do land use planning and zoning.

While the City of Vienna is both a federal province and a municipality, developments in other parts of the Metropolitan Region follow the general plans and spatial planning law of the federal provinces and the concrete zoning plans of the municipalities, creating further room for diverging goals and interests.

Thanks to its frequent, reliable, and affordable transit system and its high walkability, the City of Vienna (green chart on the left) has a modal split of 72% sustainable modes (39% public transit (PT), 26% walking and 7% cycling) vs. 28% motorized individual transport (MIT). However, almost exactly the opposite is true when you look at the city’s borders (red/green map below on the left): Out of more than 500,000 commuters into Vienna on a workday, 79% commute by MIT and 21% by PT. Within 15 years, overall traffic at Vienna’s city borders increased by 14%, with the increase in MIT with 16% being higher than in PT with 9%. 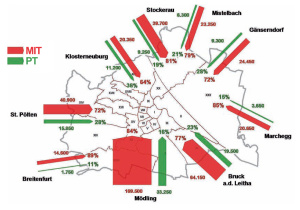 From these numbers it is clear that this discrepancy in modal split numbers is one of Vienna’s biggest transport challenges – and one which can only be solved at the regional level. However, while Vienna’s new Transport Implementation Plan has a target for 2025 of 80% sustainable and 20% unsustainable modes within the city, it lacks a measurable objective for commuter traffic modal split.

It is clear that metropolitan regions should establish a common vision for development that is not limited to administrative borders and includes both land use and transport planning. For the first time, a joint chapter on transportation in the Metropolitan Region was developed in 2015 to be included in the individual transport plans of the provinces of Vienna, Lower Austria and Burgenland.

This chapter aims at developing a common regional mobility strategy that builds on the existing process of informal cooperation, institutions (PGO, VOR, SUM) and responsibilities (managed by provincial planning departments). It doesn’t call for deeper integration or transfers of power and lacks measurable objectives.

Integrating transport planning in the region

While the joint chapter in the provinces’ transportation plans are an important first step for developing a common vision and understanding, a joint integrated strategic plan could better shape the key directions for the region’s future development and effectively integrate land use and transport planning throughout the Metropolitan Region. In order to be effective, such a plan must be mandatory and binding for developers and land use and transport planning authorities, with instruments for implementation, including financing.

As it was the done for Vienna’s new Transportation Implementation Plan, it is recommended to develop such an integrated regional plan according to the Sustainable Urban Mobility Plan (SUMP) guidelines which put an emphasis on common, coordinated action, with involvement of relevant stakeholders and broad public participation which can help to ensure long-term acceptability of visions and joint strategy. This approach was recently applied in the PUMAS (Planning Sustainable Regional-Urban Mobility in the Alpine Space) project for a regional mobility concept for the Vienna-Schwechat commuter corridor.

In the following, 5 major steps, ideas and prerequisites for developing such an integrated plan are conceptualized to serve as an impetus for discussion:

A joint metropolitan plan has to have a strong, integrated transit and land use perspective with the common objective of strengthening sustainable modes and preventing further sprawl.

Based on the principles of transit-oriented development, future developments should be planned near transport nodes and along the axes of public transport services. At the same time, dense development patterns are an important prerequisite for sustainable mobility and create walkable environments.

While Vienna’s current approach of informal metropolitan cooperation lacks “real” influence (despite the high level of formality that is reached without a legal basis), a more formal approach of cooperative multi-jurisdictional planning could ideally be led by a metropolitan planning organization or another regional agency. The Gothenburg Region Association of Local Authorities or the Joint Spatial Planning Department Berlin-Brandenburg were identified in the Catch-MR project as more formal types of governance structures that enable coordinated transport and land use planning with binding decisions and measurable output.

Such cooperative structures could substitute or at least complement the current approach of informal cooperation with more formal cooperation. However, given the different planning laws and responsibilities as well as the lack of strong instruments to enforce cooperation, legal instruments and financial means would have to be established for more formalised cooperation, e.g. to regionally redistribute taxes to realise cooperative projects and to ensure a stable, transparent, and long-term framework for funding on the regional level.

However, the central question for facilitating cooperation through regional governance will be if the City of Vienna and the provinces and municipalities (in particular the powerful cities around Vienna) are willing to transfer power to an institution such as a strengthened PGO or VOR on the regional level despite particular interests, political loss of power, and legal barriers. At least, it would make sense to transfer zoning competencies from the municipalities to the provinces and to reduce federal fiscal incentives for car commuting.

Providing high capacity, high-frequency transit with good regional connectivity is essential to encourage commuters to switch to sustainable modes. However, the S-Bahn commuter rail network and regional trains, which are the backbone of PT commuting into Vienna, face capacity constraints that can be addressed through new lines, shorter intervals and considerable infrastructure investments.

In this regard, a tangential S-Bahn tunnel through Vienna, as recently proposed by Lower Austria, could make sense but this idea was immediately rejected by the City of Vienna. However, large rapid transit railway tunnel projects such as London’s Crossrail, Stockholm’s Citybanan, Melbourne’s Metro Rail Tunnel, Malmö’s Citytunneln or Auckland’s City Rail Link are currently addressing similar challenges in other cities and regions, thereby showing Vienna how to make a leap in increasing capacity, frequency and speed of commuter rail.

Moreover, instead of further extending the subway system (which is attractive for the City of Vienna as the Federal State covers 50% of these costs), it would make more sense to supplement the S-Bahn network with more cost-effective light rail lines (high-speed trams) reaching out into the Metropolitan Region.

An analysis of modal splits along different routes into Vienna shows that corridors without motorways but with commuter rail connections have significantly higher PT share. Moreover, proximity of transit stations and availability of Park&Ride facilities foster commuting by PT. The analysis further shows that only 13% of 110,000 journeys involve a PT transfer before entering the city, highlighting the need for a better PT network in suburban and rural areas (where the network was actually thinned out in recent decades).

Improving suburban/rural PT means better “last mile” connections (bus transfers to and from commuter train stations), shorter intervals, more stations, promoting innovative micro PV approaches as well as carsharing, carpooling, and bikesharing solutions, and infrastructure investments in multimodal station design. Here it is essential to develop quick, comfortable and safe interchange nodes between routes and/or transport modes and to foster the combination of private and public modes (Park&Ride, Bike&Ride, etc.). A great example in this regard is the new “Umweltbahnhof Kerpen-Horren” in Germany, Europe’s first climate-neutral train station with more than 12,000 commuters per day.

Apart from infrastructure and network investments, better tariffs and information are further means to improve regional PT. Extending the main tariff zone from Vienna to the Metropolitan Region would make it more affordable to commute by PT, building on the huge success of Vienna’s attractive new price of EUR 365 for its annual transit pass (+80% annual transit pass holders within 3 years). Further developing the digital multimodal transport planner and real-time travel information portal AnachB.at (A to B) into an integrated platform for information, ticket booking and payment (such as the research project SMILE) would also facilitate PT commutes, particularly for people commuting on a non-regular basis.

Increased investment in regional PT infrastructure and services should be complemented by measures to restrict car traffic in centres. Vienna’s Parking Space Management successfully reduced urban car traffic and parking space occupancy rates, with a significant reduction in parked cars from outside of Vienna. However, large parts of the city (in particular in outer districts) still aren’t covered due to political reasons.

Extending the policy to the whole city (and reducing parking spaces) would further combat car commuting into Vienna. Alternatively, a congestion charge at Vienna’s city borders, similar to Oslo’s toll ring on all access roads into the city, could complement the current policy. It is recommended that commuters would have to pay per trip into the city.

Next-Generation Transportation: Learn from Vancouver, Vienna and other Leaders in Future Urban Mobility!